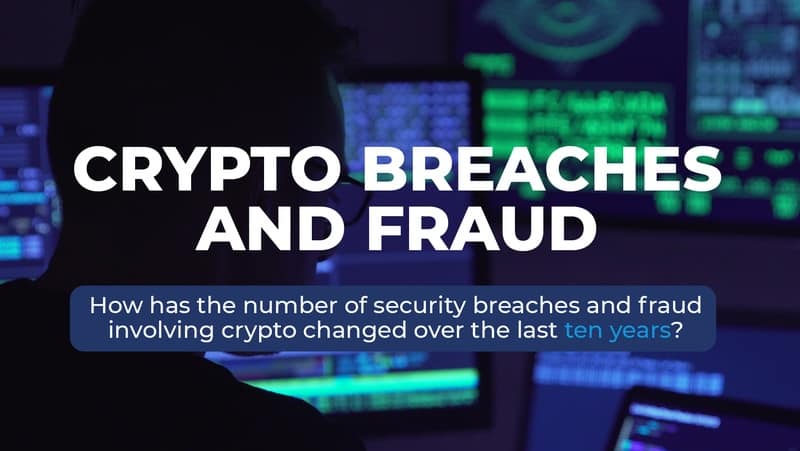 How has the number of security breaches and fraud involving crypto changed over the last ten years?

As cryptocurrency has grown in popularity, crypto-related crimes have also been on the rise as we showcased in our Crypto Crimes report earlier this year.

In particular, the number of exchanges and currencies that are being targeted by hackers stealing coins has increased, as many crypto and blockchain technologies are still in their infancy so they can be more easily exploited.

So, how have the number of crypto breaches and fraud offences changed over the last decade, which have been the biggest, and how do they vary between different countries and currencies?

The most valuable crypto breaches and fraud 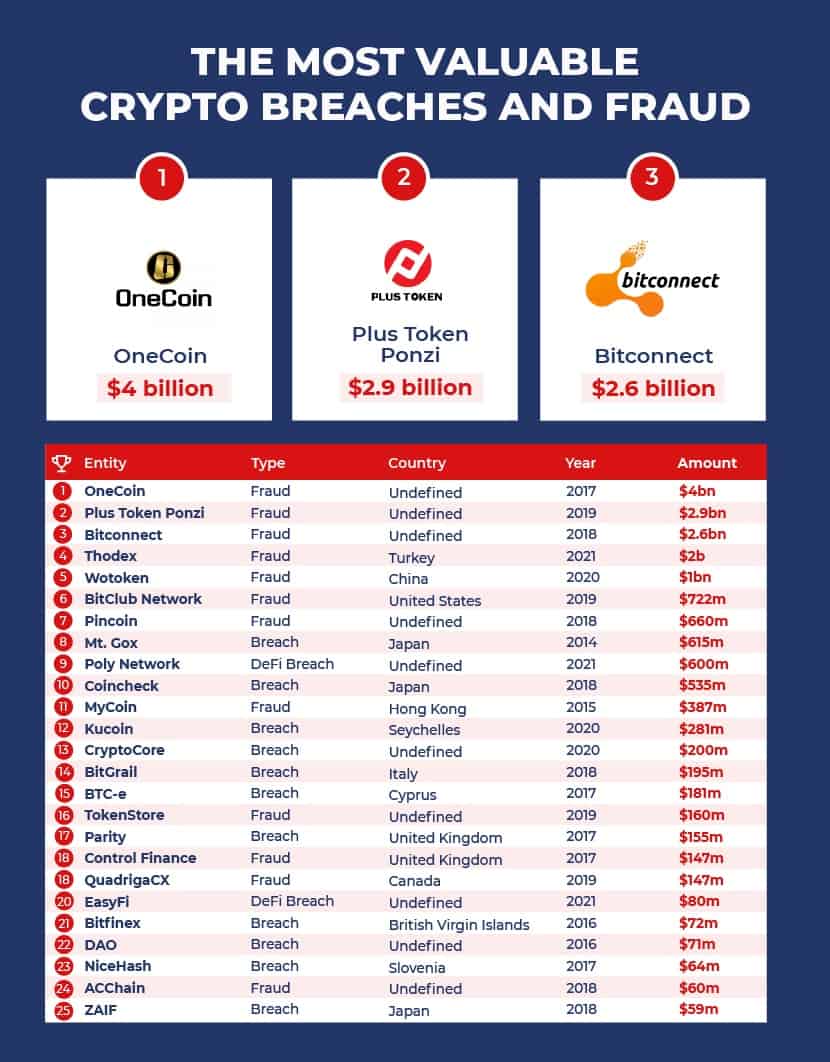 The biggest crypto offence to date was the OneCoin Ponzi scheme, which was promoted as a new cryptocurrency and has been dubbed one of the biggest scams of all time.

The founder, Ruja Ignatova, disappeared in 2017 and has yet to be found, although many others have been arrested in connection with the scheme and US authorities state that the scheme defrauded investors of $4 billion.

Over 100 people were arrested in relation to the scheme and the ringleaders were recently sentenced for up to eleven years by a Chinese court.

Not all crypto breaches relate to hackers gaining access to funds, as was the case with Bitconnect, which was linked with a Ponzi scheme and guaranteed unrealistically high returns, eventually scamming investors out of $2.6 billion.

How much have crypto breaches and fraud increased? 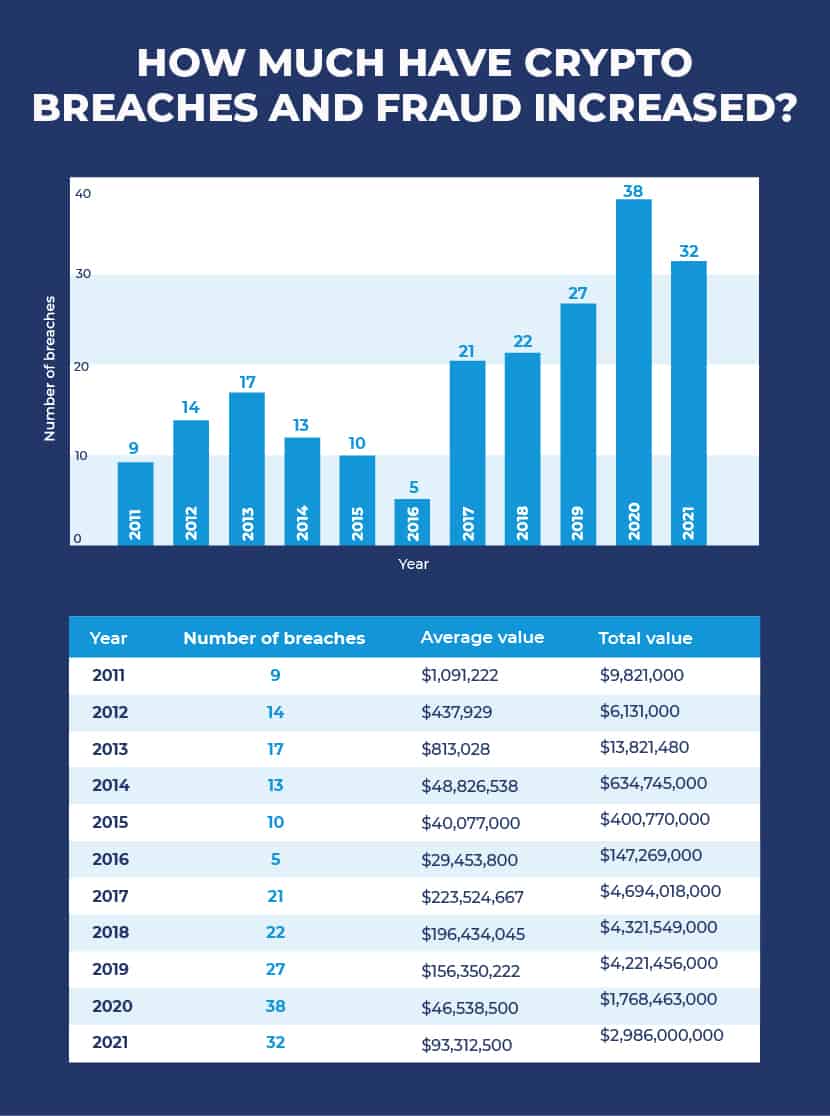 While 2021 looks set to be the year with the highest number of offences, 2017 was the year that saw hackers make the most money, stealing highs of $4.7 billion in total and $223.5 million on average.

As hackers and their technology become more sophisticated, it’s clear that breaches are an increasingly big concern for the crypto world.

The most commonly targeted currencies 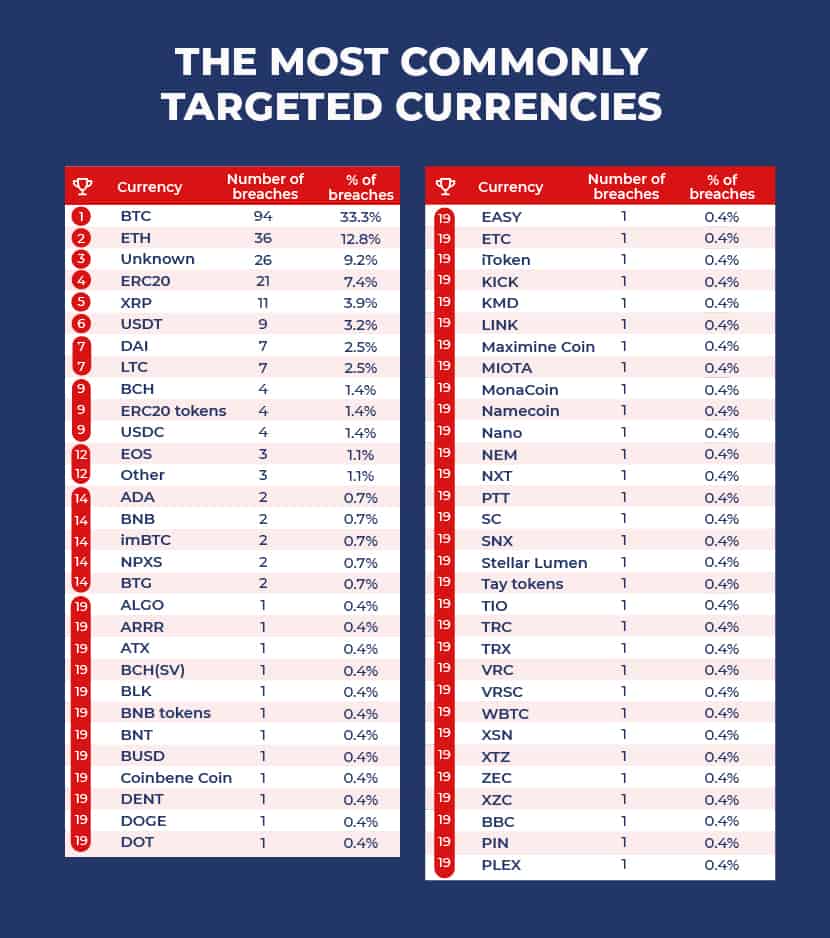 Across 208 breaches, 59 different cryptocurrencies were stolen, with Bitcoin being the most commonly targeted as it was involved in just over a third of breaches, with 94 over the last decade.

The most common types of crypto offence 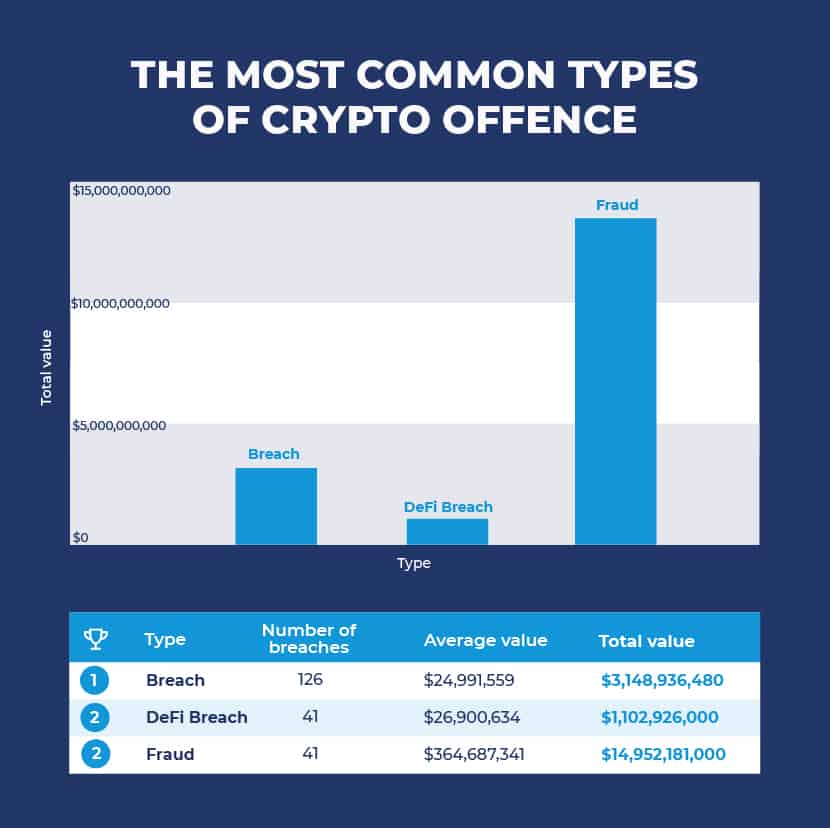 The most common type of attack is breaches of wallets and exchanges, with 126 in the last ten years, which is far more than offences involving DeFi attacks and fraud (both 41).

The largest of these breaches to date saw Mt. Gox have $615 million stolen over the years, leading to the platform ultimately becoming insolvent in 2014.

However, it was cases of fraud that were the most lucrative for criminals, usually seeing the perpetrators walk away with big sums.

The average crypto fraud incident saw $365 million stolen (over 14 times as much as breaches), while just under $15 billion has been stolen in total via fraud since 2011.

However, the number of DeFi (decentralised finance) breaches is on the increase, with this new technology more open to potential weaknesses.

The most commonly targeted countries 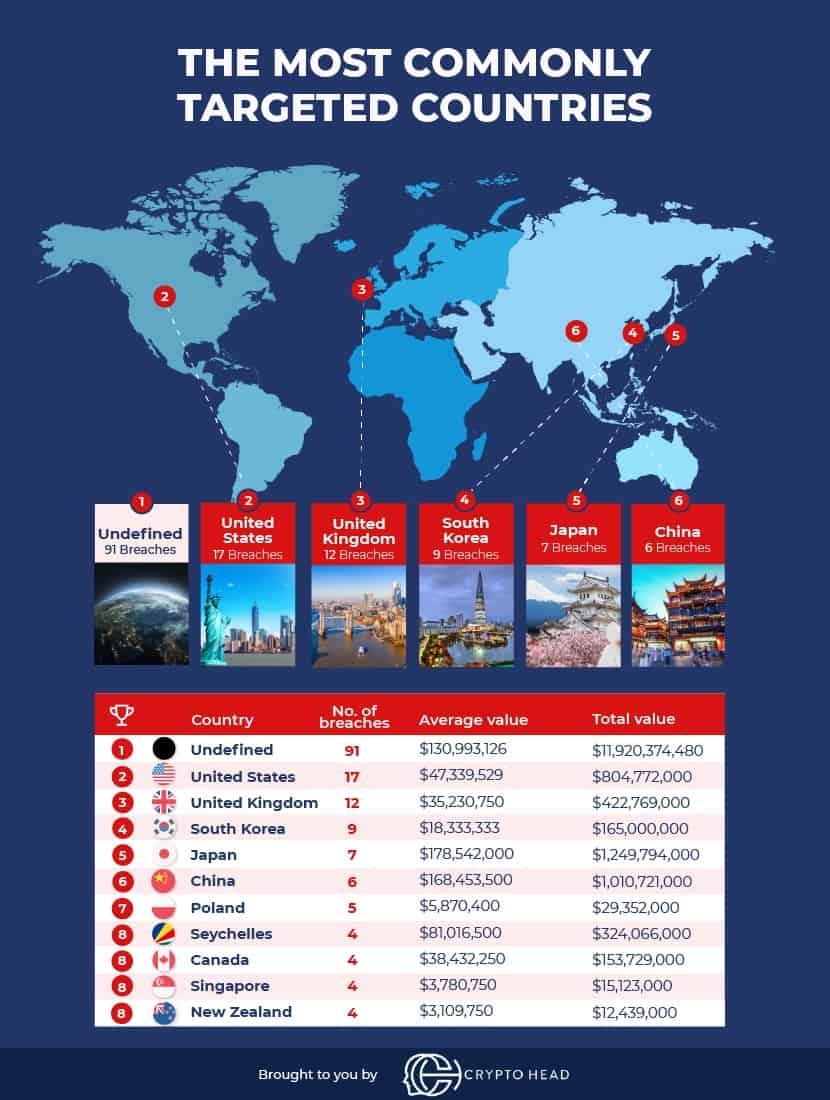 The vast majority of cases can’t be tied to any one country, but of those that can, the majority targeted the United States (17), followed by the United Kingdom (12), South Korea (9), Japan (7) and China (6).

The majority of data was sourced from Crystal’s Map of Security Breaches and Fraud Involving Crypto 2011-2021, supplemented with further breaches from a variety of sources and articles, including ZDNet and Selfkey.

We omitted instances where crypto had been seized by government or law enforcement authorities.